Plans for Berlin’s brand-new landmark, the Estrel tower, were presented to the public today by contractors Ekkehard and Maxim Streletzki, alongside architects Regine Leibinger and Frank Barkow. Among those present were Franziska Giffey, elected governing mayor of Berlin, and Martin Hikel, mayor of Berlin’s Neukölln district. At 176 metres tall, the tower will be Berlin’s largest skyscraper and Germany’s highest hotel – a unique project at the forefront of innovation in modern construction. 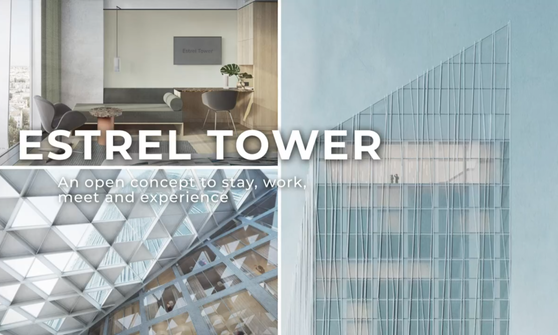 “The Estrel Tower presents both a huge opportunity and a huge gift for Berlin,” said Franziska Giffey, who has been supporting the project for the past decade, most notably in her former role as mayor of Neukölln. “We want to usher in a new era for our capital city. A new era calls for a new look. And this will become a part of the face of Berlin.” Giffey’s successor, Martin Hikel, was equally enthusiastic: “As major of Neukölln, I’m very proud that my district will be home to this tower, which will transform its surrounding area into a new hub.”

Following ten years of planning, Ekkehard Streletzki’s big vision is becoming a reality. “Like the construction of the Estrel itself, this all began with a sketch on the back of a napkin,” he remarked at Wednesday’s press conference. Streletzki’s vision has become the 176 metre tall Estrel Tower, which will sit over 45 floors and a total of 77,500 square metres, with 525 hotel rooms and serviced apartments, 9,000 square metres of state-of-the-art offices and co-working spaces, 2,000 square metres of additional event space in the tower’s base, as well as an entire floor devoted to fitness and wellness. Its beating heart will be its atrium – awash with bright, natural night and suffused with greenery – which will house a local bakery, as well as a gallery and start-up incubator. The overall concept is rounded out by a public park and recreation area on the banks of the canal. A playground has also been included in construction plans: “We want to be a good neighbour,” emphasised Maxim Streletzki.

The coronavirus pandemic has influenced plans to develop this project into a multi-use building: “Over the past two years, we’ve been thinking a lot about how meetings and events will look in years to come,” explained Maxim Streletzki. “We strongly believe that there is no substitute for human interaction – and that we have to improve on existing concepts.” For Maxim Streletzki, encouraging exchange between the tower’s visitors and residents is at the heart of the project: “By designing this building for a wide array of uses, we hope to facilitate many memorable experiences and inspiring encounters.”

Meeting rooms and private dining rooms will be located on the 41st and 42nd floors, while the 43rd and 44th floors will be home to a farm-to-table restaurant, serving ingredients sourced directly from producers. A large portion of these ingredients will come from a historic farm in Brandenburg, which has been acquired specifically for this project. “This way, we’ll be in control of our supply chain and know exactly where our ingredients are coming from. It doesn’t get more fresh or transparent than that,” explained Maxim Streletzki.

Another highlight is the sky bar with an outdoor terrace and a spectacular panoramic view of Berlin. These upper four floors have been flexibly designed to serve as event spaces and offer the most unique event experience in Germany at these heights.

Sustainability has always been of great importance to the Streletzki family and was instrumental in the planning of the Estrel Tower from the start. As designed by architecture firm Barkow Leibinger, the building’s exterior features aluminium fins that were custom-built according to sun’s position with respect to the site; the result is the building’s natural cooling effect in the warmer months. In addition to planted rooftops outfitted with solar panels, the project makes use of an innovative CO2-saving energy concept developed in cooperation with E.ON Business Solutions and RTWH Aachen University. For Maxim Streletzki, this marks a milestone: “We are planning a hydrogen-based energy production concept. If everything works out the way we and our research team are hoping, this could serve as a blueprint for future projects.” Regionally-sourced wood and recycled materials will be used for the interior fittings, and more than half of the available parking spots will be reserved especially for bicycles. The grounds will be planted with wildflowers, creating a biotope for diverse animal species. One of the Tower project’s goals is to be awarded LEED® (Leadership in Energy and Environmental Design) Gold certification.

A tunnel will seamlessly connect the Tower to the Estrel Congress Center (ECC), which boasts 30,000 square metres of event space. The new construction project allows the Estrel to further solidify its position as Germany’s largest hotel and Berlin’s most successful conference venue – also thanks to its ideal location: The complex will serve as a gateway connecting the city centre and its environs, owing to its convenient southern location between BER Airport and the heart of Berlin. BER can be reached by S-Bahn (elevated railway) or car in 20 minutes. And Tempelhof Field is just a 15-minute S-Bahn ride from the premises.

The Estrel Tower is set to open in 2024. The total investment volume, excluding land, is 260 million euros.